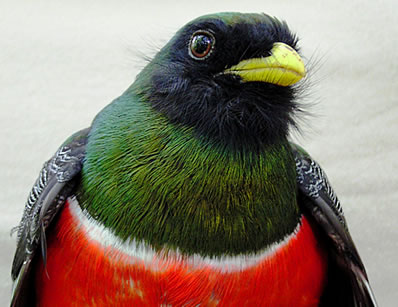 Forest birds in central Nicaragua may currently be the most vulnerable to local extinction because of low forest cover within decreed reserves.

An increasing number of empirical studies have been done on the effects of tropical forest fragmentation on avian communities, but few researchers have applied these theories to assess the vulnerability of birds in poorly researched countries such as Nicaragua. I used a logistic regression to determine which natural-history characteristics were most important in predicting a list of threatened birds known to occur in Nicaragua. The best model included five macroecological variables (body weight, habitat specificity, trophic group, forest preference, and biogeography within Nicaragua). I used this model to generate predicted probabilities of extinction for all forest birds in Nicaragua. The predicted probability of extinction from the best model ranked 63% of the extinction-prone birds from La Selva, Costa Rica, and 59% of the extinction-prone birds from Barro Colorado, Panama, in the first quartile of all forest birds recorded in Nicaragua. This method provides a first-order approximation of which species deserve global and national priorities for conservation. The central and Atlantic regions of Nicaragua deserve high priority for conservation at a global scale, whereas the Atlantic region deserves the highest priority for conservation at a national scale. The Nicaraguan Ministry of Natural Resources and the Environment has done an adequate job of identifying areas for conservation based on the proportion of decreed nature reserves in each biogeographic region and the distribution of forest birds with a high predicted probability of extinction. Forest birds in central Nicaragua, however, may currently be the most vulnerable to local extinction because of low forest cover within decreed reserves.