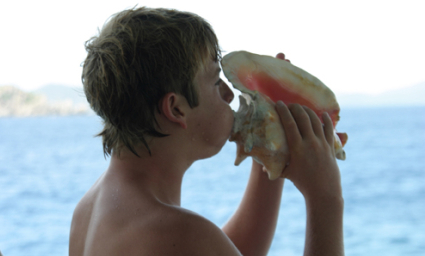 We offer tribute and classes throughout the year to honor the many uses of the conch shell in the Ostional Pueblo society.

The "meat" of the conch is used as food, either eaten raw, as in salads, or cooked, as in chowders, gumbos, and burgers.

Conch shell trumpets were historically used by the indigenous people. The Ostions also used the conch shell when the chief died.

They produce pearls,  coming in a range of hues, including white, brown and orange and many intermediate shades, but pink is the color most associated with the conch pearl.

In popular folklore, it is believed that if one holds an open conch shell (or any other large marine snail shell) to the ear, the ocean can be heard. This phenomenon is caused by the resonant cavity of the shell producing a form of pink noise from the surrounding background ambiance. In reality, the person is hearing their blood flow in the capillaries of their ears; the sound enters the shell and reverberates through the chambers before coming back. This sound can also be heard (though rather poorly) by covering one's ear with one's hand. The rushing sound is the flow of blood.