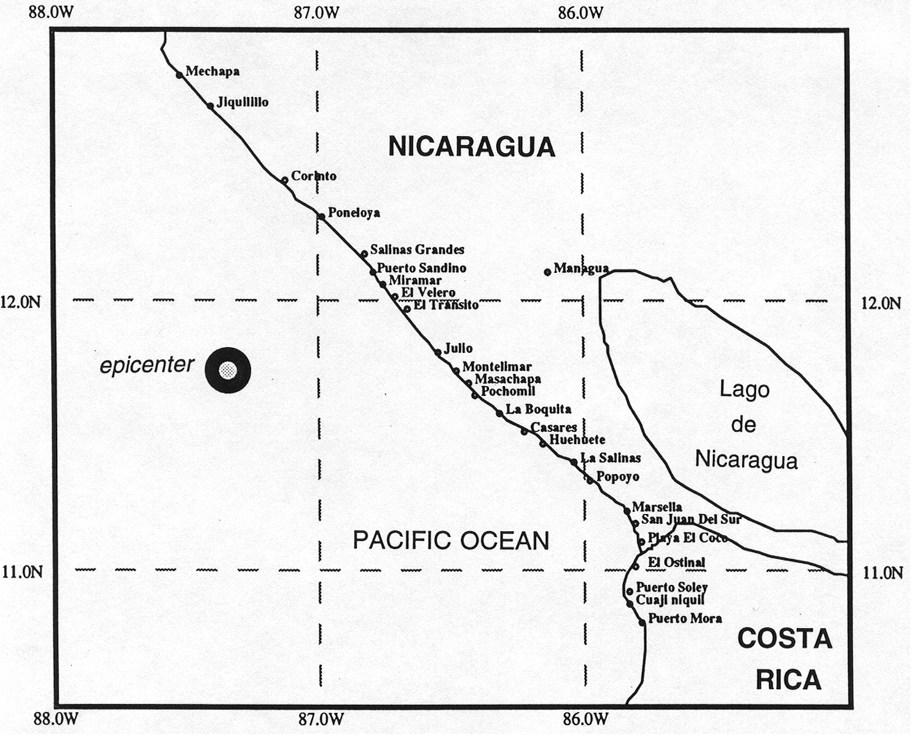 On 2 September 1992 an earthquake generated a very destructive local tsunami which struck along a 220 km coastal section of the Pacific coast of Nicaragua with waves of up to 10 meters in certain areas. The first of the tsunami waves reached the coast of Nicaragua about 20 minutes after the earthquake. The first wave was relatively small but the second and third waves were higher and more destructive.

Effects of  Tsunami in the Immediate Area - Deaths and Damages

There was major damage to coastal towns and villages from San Juan Del Sur to Masachapa. At least 70,000 people living in the coastal areas of 27 communities s were affected by the tsunami.  Sixty percent of all houses were destroyed in San Juan Del Sur, a small town with 13,000 people.

The 2 September 1992 event indicates that the potential tsunami hazard for the Central America region has been underestimated.  Major tsunamigenic earthquakes occur primarily near the Middle America Trench along the intra-oceanic convergent margins of the Cocos and Caribbean plates - a zone of active, oblique, shallow subduction. The quantity and thickness of subducted sediments along certain sections of these margins can alter seismic focal mechanisms and the geometry and velocity of ruptures. Certain large earthquakes, along such zones, can be expected to be "slow" - that is to have lower rupture velocities and to generate seismic waves of longer periods. If measured with short period seismic instruments, the energy release of such major earthquakes will always be underestimated. The greater tsunamigenic potential of such earthquakes -along such zones of oblique shallow subduction - is not only the result of greater energy release but of the contribution of subducted sediments to the geometry of ocean floor deformation and volumes of displacements. "Bookshelf" faulting of subducted sediments, as that which characterizes the offshore area of Nicaragua (and which probably occurred during the 1992 earthquake) can generate the so-called "tsunami earthquakes" that can be potentially more catastrophic.

INETER, THREATS BY MAREMOTOS (TSUNAMI) IN NICARAGUA AND DISASTER PREVENTION