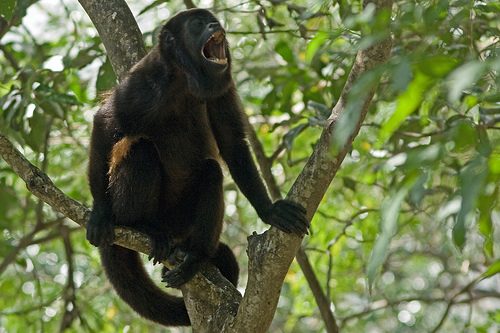 Howler monkeys live in groups where the number of females is greater than the number of males. Groups may have only one male or several males.


Move over turtles and cats, they rest about 80 percent of the time occasionally eating mainly top canopy leaves, together with fruit, buds, flowers, and nuts.

And get this humans, howler monkeys have trichromatic colour vision like us.

They have a long cultural history as well.  They place a significant role in Mayan myth and part of their daily life. To the Mayas of the Classic Period, they were the divine patrons of the artisans, especially scribes and sculptors. Copán in particular is famous for its representations of Howler Monkey Gods. Two howler monkey brothers play a role in the 16th century myth of the Maya Hero Twins included in the Popol Vuh.

When you get a chance make arrangements with Kevin to view the Congos of Ostional.